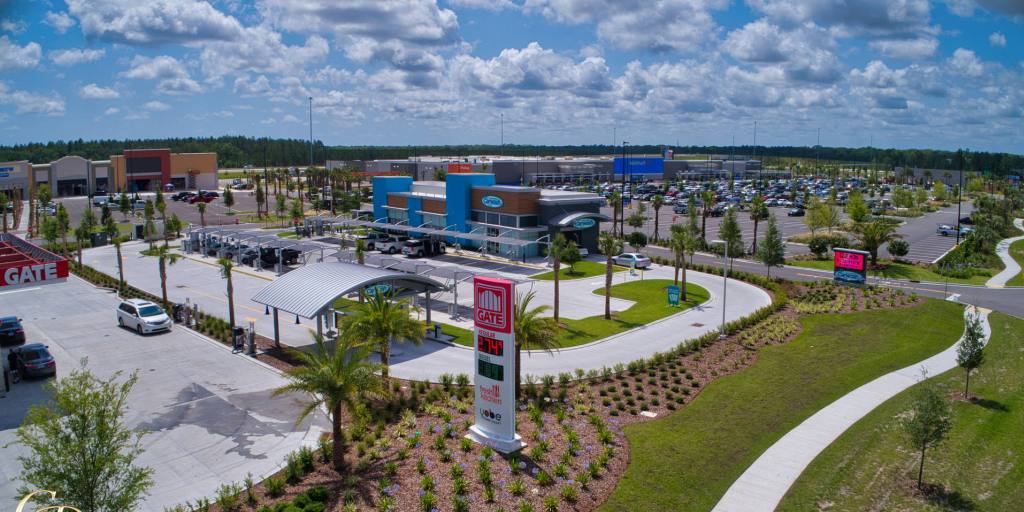 Eight months after Walmart was the first business to open in the Durbin Park shopping center, developers behind the project have submitted to St. Johns County officials a proposal for the next stage of the large-scale, mixed-use plan in the northern part of the county.

Plans for Phase II call for more than 2,000 residential units, 350 hotel rooms and more than 2 million square feet of commercial space, including office and retail. Flagler Health+, which just announced its purchase of 40 acres of the site, will also build a 150-bed hospital as part of a larger “health village” that will include medical providers, specialized services and wellness offerings.

The first anchor tenant — and only tenant, so far — to be announced is Bass Pro Shops, which will open a first location of the outdoor recreational giant retailer’s entry into the Jacksonville metro market.

The entire 1,700-acre Durbin Park property is being co-developed by the Gate Petroleum Company and the Gatlin Development Company. The first phase — located on the west side of the new I-95 interchange between State Road 9B and Race Track Road — was entirely commercial.

Phase I, called The Pavilion at Durbin Park, is about 90 percent leased and has been successful in driving customers and traffic to the complex, according to Misty Skipper, a spokeswoman with Gate Petroleum. Just a few of the businesses open already include Home Depot, Keke’s, Sprint, Tropical Smoothie and a Gate gas station/convenience store. A Cinemark movie theater is under construction, but no opening date has been set.

As proposed, Phase II, which has not been named yet, would encompass more than 1,000 acres on both sides of I-95. Gate plans to work with Gatlin on the commercial side, but they will not be partners in other uses, Skipper said.

Melissa Glasgow, the county’s director of economic development said: “Durbin Park is really transforming before our eyes right now with several new businesses opening and more buildings under construction. Residents have waited patiently to have more shopping and dining conveniences nearby without having to drive into Jacksonville. … The parking lots are consistently full, especially on evenings and weekends. Those dollars are being spent locally, which creates a positive financial impact for the county and supports programs and services provided for our residents.”

Building on the success of the first part of the project, on July 2 Gate submitted an application for the second phase of development to the county. It would require a rezoning of 1,287 acres of the project from Open Rural to Planned Unit Development, from St. Johns Parkway almost to U.S. 1.

Multi-family rental units such as townhomes and apartments would be scattered throughout the development. Skipper said there would likely be more than one hotel.

The project overview says the urban village concept will bring an “interactive gathering place” for residents as well as pedestrian-friendly open space. Plans for recreational and entertainment amenities have not yet been finalized, Skipper said.

Glasgow said she believed Phase II would “build on the solid retail foundation that has been established and add to the diversity of offerings at the development. This distinct blend of health, retail, office and hotel uses will help create an environment attractive to corporate offices and other commercial investment. … Over time, I expect Durbin Park to become one of our largest employment centers, providing jobs for our residents at all levels of the spectrum.”

As the proposal works its way through the review process, developers hoped to break ground on Phase II sometime in the next year, according to Skipper. Once completed, Durbin Park will be the largest shopping center in Northeast Florida in terms of square footage. It is expected to be built out incrementally over the next two decades, including road improvements, according to the application submitted with the county.