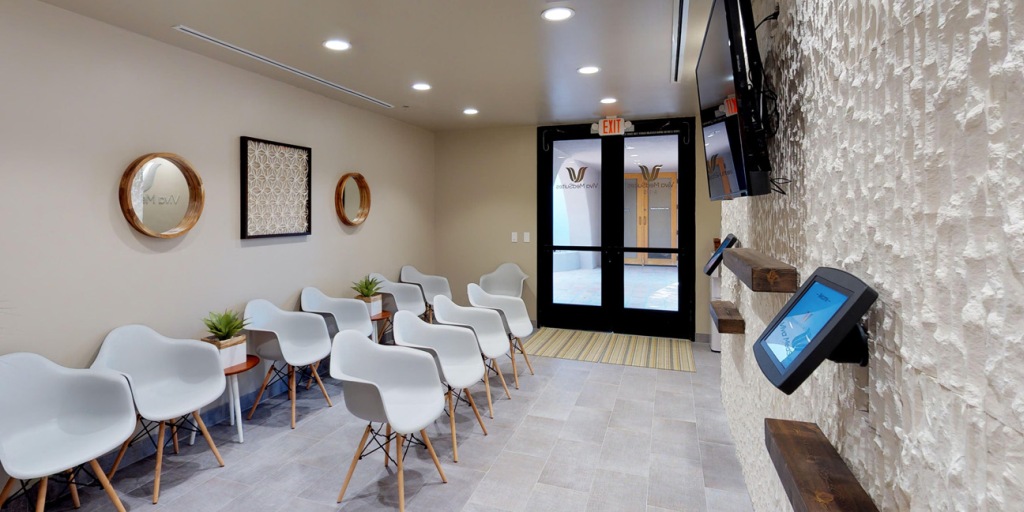 Collaborative work environments remain one of the biggest trends in office space. These coworking spaces have proven to improve the happiness, productiveness, and well-being of employees. However, the use of coworking spaces remains greatly underdeveloped in a medical industry that has seen private practice rates plummet in recent years.

A medical coworking environment offers physicians many advantages, including a fully managed business facility, with bite-sized pieces to fast track their pathway into owning their own private practice. A coworking space can help medical professionals reduce their costs while also allowing flexibility to meet their specific demands and increasing their efficiency.

After spending years gathering debt, many recent medical school graduates are forced with the impossible prospect of taking on even more debt to start their own private practice.

It’s estimated that it takes a minimum of $70,000 to secure commercial office space. On the heels of huge student loan debt, this proves to be insurmountable for many physicians. When you take into account the cost of specialty equipment, office furnishings, and other miscellaneous purchases, costs can easily surge well into the six figures.

On top of these base costs, regulatory measures have been working against private practitioners in recent years. With a 2% cut in medicare payments to doctors and healthcare providers, the overall healthcare climate does not favor physicians attempting to run a private practice. In a poll, 65% of physicians call these diminishing reimbursements the top issue negatively affecting practice profitability.

Luckily, coworking spaces help alleviate many of the costs associated with owning one’s own private practice. Coworking spaces handle all construction, regulatory issues, and filings for locating, securing and building out the office environment. The physician is able to afford their own practice without debt and regulatory burden that is typically associated with it.

An efficient pooling together of resources

Essential rooms such as waiting rooms often take up a significant amount of space in medical offices. In coworking spaces, many of these spaces are shared in order to boost efficiency while reducing cost. A shared infrastructure, common space, and staffing resources allow for a leaner and more efficient mode of operation for medical care providers.

Reception desks, waiting areas, and other rooms can be shared amongst various medical practitioners of a coworking space. Administrative staff such as receptionists or cashiers can be shared as they do similar work in their respective practices. Some workspaces even have automated receptionists, where the patient walks into the waiting room, picks his doctor on an iPad, and a notification is sent to the doctor to indicate that his or her patient is ready.

A flexible practice that suits your needs

Collaborative workspaces also allow the physicians to be as flexible as they like in terms of work schedule, length of the contract, and level of business control. This flexibility allows physicians to customize their entire practice, from a number of employees to size of their office space.

Physicians go through years of training in order to become experts in their designated field. However, most are given little experience when it comes to owning and running their own business before they are expected to run their own private practice. Over half of businesses fail – private medical practices included. Private physicians are forced to wear multiple ‘hats,’ one being that of a doctor and the other a businessman. Many times this is overwhelming for someone with little to no business acumen.

Fortunately, a collaborative work setting takes much of the risk of owning a business out of the equation and simply lets the doctor do what he or she was trained to do: help people. The coworking space can act as the central platform for all operations, including reception, new patient processing, billing & collections, EHR (electronic health record), digital and web marketing, and more.

Many times the physician doesn’t need a large office space. They just need room to conduct their specific operations. Some even just want to work part-time. For these types of physicians, it would be inefficient and unsustainable to rent out their own office. Collaborative workspaces allow the physician to rent out a single room if need be. In fact, the doctor can expand at his or her own pace: room by room until they are able to afford their own private practice.

In an environment with a steep barrier to entry, medical doctors must find a way to maximize efficiency and lower operating costs. A shared space that is managed for medical purpose is a viable solution to many physicians as they can share common resources, meaning they can concentrate their energy where it matters most. For many, it’s just a temporary solution, acting as a private practice accelerator as they gain the skills, money, and business acumen to be able to start practices of their own. But as it becomes harder and harder to start your own private practice, collaborative medical workspaces will become the most viable option.