Site work has begun on a new 87-acre medical complex in Panama City Beach, Fla., that will include an ASC, facilities for orthopedic surgery and cardiology, a hospital, urgent care and primary care, according to an Aug. 29 report from the Panama City News Herald.

The center is being built through a partnership between Tallahassee (Fla.) Memorial Healthcare, Tallahassee-based Florida State University and St. Joe Company, a developer.

The hospital building was originally slated to open with 30 to 40 inpatient beds, before expanding to 100 down the line, but due to demand, the facility may need all 100 beds now, according to the report.

The medical office building on the currently-unnamed campus is expected to open sometime in 2024, with the hospital set to open in 2027.

“There’s a lot of great hospitals in this area, but [they] are a distance away,” Andrew Starr, chief health operations officer at Tallahassee Memorial Healthcare, told the Herald. “That [creates] a real opportunity [for this campus], and also a situation that needs to be bridged as you have more and more citizens moving into this immediate area and the surrounding areas. Having a healthcare infrastructure to further support the growth and population is not a want, it’s a need.”

An entity doing business as Plantation Medical Center SNU LLC sold the property to a private 1031 investment firm based in New York City for $46.7 million. Patrick Nutt and William Wamble of SRS’ National Net Lease Group represented the seller in the off-market transaction, and Jason Maier of Stan Johnson Co. represented the buyer.

Situated in Galloway Medical Park 1, the medical group has more than 65 employees and is located within the desired Kendall suburban market, just minutes from other specialty physicians and Baptist Hospital’s Kendall Campus.

Healthcare real estate is often referred to as recession proof, and as many industries reduce their commercial footprint, medical groups and physicians are betting big. In fact, in 2022, investors have allocated 57% more capital to healthcare real estate when compared to 2021, according to World Property Journal. 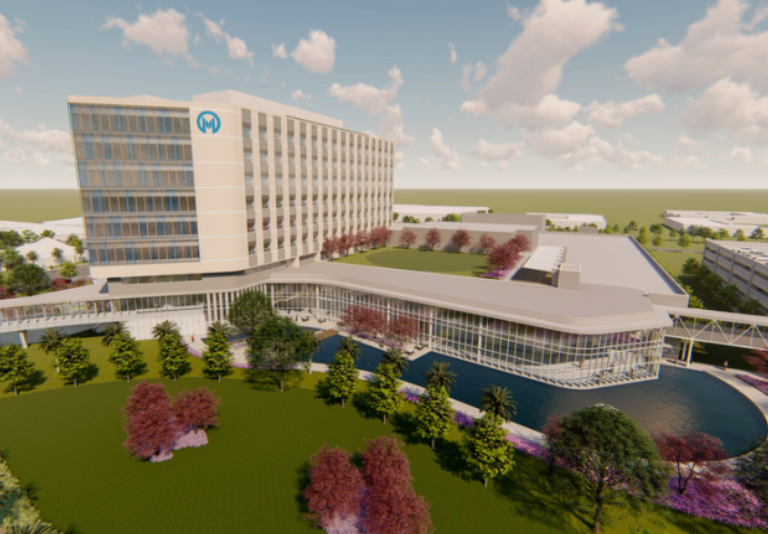 Pictured above:  Rendering of Moffitt Cancer Center in Tampa

Moffitt plans to build a new outpatient facility at the southeast intersection of East College Avenue and 27th Street South in Ruskin, less than a mile from Interstate 75.

By November, Moffitt expects to complete the purchase of land and have it rezoned, with final approval expected by the end of the year.

“Moffitt is building incredible momentum to expand our footprint and bring cancer care closer to where our patients live,” said Dr. Patrick Hwu, president and CEO of Moffitt. “We are laser-focused on future expansions that will allow us to create a Moffitt health system to address the growing cancer burden in the state of Florida.”

Moffitt is also developing 775 acres in Pasco County, the largest expansion in the cancer center’s history. The new life sciences innovation district will serve as a hub for research, digital innovation, education and patient care. The multiyear, multiphase project will include about 16 million square feet of research lab, light industrial and manufacturing, general office and clinical building space.

The city issued a permit Aug. 11 for the Village Medical build-out at Walgreens at 3505 University Blvd. W. in the Lakewood area.

Horizon Retail Construction of Sturtevant, Wisconsin is the contractor for the $625,000 project. Horizon will build-out a 3,196-square-foot Village Medical clinic within the Walgreens, which will continue to use the remaining 10,638 square feet of the store for its pharmacy and retail sales.

It is one of 10 Village Medical at Walgreens clinics opened or planned in Duval County.

As with the others, the project will add the clinic with eight exam rooms.

The planned and improved renovation costs so far top $6.3 million in Duval.

In addition to the Lakewood area, they are in:

The Jacksonville clinics are part of Walgreens’ effort to open 600 or more Village Medical centers by 2025 and another 400 by 2027.

Walgreens said the clinics are ideal for patients with chronic conditions who need multiple daily prescriptions. It said the clinics accept a wide range of health insurance options and offer in-person and virtual appointments.

This was the final piece of a 66-acre property the city purchased and facilitated development on over nearly a decade. With this deal, the last piece of land under contract to private developers at Pines City Center has been sold, while the city retains land for its municipal uses.

The city sold 9.15 acres at the southwest corner of Pines Boulevard and Palm Avenue for $13 million to Pines and Palm Ave 2022 LLC, an affiliate of Terra. The site previously housed Pembroke Pines’ former City Hall, which was demolished.

Officials with HCA couldn’t be reached for comment regarding their plans for the Pembroke Pines site. The company does not have a hospital in the city.

Pembroke Pines granted plat approval for 120,000 square feet of medical office space on the property that was subsequently acquired by the HCA affiliate. A site plan has yet to be submitted.

For the 3.15-acre site retained by Terra, the city granted approval for 120 to 150 units of senior housing. Terra said it is in the planning stages for that parcel and has no renderings to share yet.

Sarasota Memorial Hospital (SMH) announced plans to move forward with the construction of a new hospital in North Port, FL.

The facility will be constructed on a 32-acre undeveloped site first bought in 2007. With the land purchase, the Sarasota County Public Hospital Board pledged to invest in the medical infrastructure needed to support a hospital in North Port.

The size, cost, and construction schedule for the hospital are still being finalized. Initially, SMH-North Port will open with approximately 100 beds, but will be constructed to have the capacity to more than double in size to meet local healthcare needs.

SMH-North Port plans to offer a comprehensive range of acute medical, surgical and specialty care, outpatient programs and diagnostic services, as well as space for educational and support programs.

The facility will be built with hurricane-proof materials and a back-up energy center with connection to the electronic medical records, clinical systems and specialized support of Sarasota Memorial Health Care System.

“Building a hospital in North Port has been part of our strategic plan and a longstanding goal of city and hospital leaders for many years,” said Sarasota Memorial Health Care System President & CEO David Verinder. “As we had hoped, the new Venice hospital is expanding and bringing our extensive physician base further south, which provides the support and specialty services we need to move forward with a full-service hospital in North Port.”

SMH-North Port will be the health system’s third acute-care hospital and the first hospital for the city of North Port. With a growing population of 80,000 residents, North Port is now the largest city both in land mass and population in Sarasota County, and one of the fastest-growing cities in the nation.

“The want and need for a first-class medical facility in the North Port community is palpable, and has been for many years,” City Manager Jerome Fletcher said. ”This meeting was just the beginning of the discussion, and the City looks forward to hearing more about how we can support the plans and the economic development opportunities a new hospital will bring to North Port.”

SMH was recently awarded a 5-star rating for overall quality from the federal government. The 5-star quality rating marks SMH as the only hospital in Florida, and one of only 33 in the nation, to repeatedly earn the distinction, according to the hospital.

Of the 4,500-plus hospitals that were evaluated, fewer than 14 percent of received 5 stars in the CMS ratings. In Florida, only 15 hospitals achieved the 5-star designation in 2022.

AdventHealth has adjusted its plans for the former Holy Land Experience site it bought last year in Orlando.

The Altamonte Springs-based health system — which owns some of the largest hospitals in Orlando — filed paperwork with the city of Orlando to change the proposed project at 4655 and 4615 Vineland Road to a three-phase project.

The first phase would include a one-story, 24-bed, 19,600-square-foot, freestanding emergency department with a helipad.

New plans submitted to the city do not specify what the second or third phases would include, but they do mention the potential for a parking garage. The updated plans call for the demolition of all existing buildings on the site.

Prior plans had the project’s first phase include the emergency department along with a four-story, 90,450-square-foot medical office building, with the second phase including a five-story, 250,100-square-foot hospital.

“We continue to work through our planning and design process to determine how best to serve the health care needs of the Millenia area,” Kari Vargas, CEO of AdventHealth Winter Garden and the west Orange and south Lake market, told Orlando Business Journal.

Baptist Health South Florida is set for an expansion after purchasing land next to West Kendall Baptist Hospital for $17.92 million.

The deal is part of the 70-acre West Kendall Town Center project, which was recently approved by Miami-Dade County officials.

Miami-based KTC SW 88 St LLC sold 17.9 acres on the east side of the hospital to the nonprofit health care provider. NAI Miami brokered the deal, as several of its executives are also co-owners of the seller.

Located at the southwest corner of Southwest 88th Street and Southwest 158th Avenue, West Kendall Town Center was originally approved for a mostly commercial project, but the owners recently changed the plan to make it a mixed-use project. In addition to the health and wellness district, the site is approved for 576 apartments in the residential area, 491,000 square feet of commercial and another 224 apartments in the town center area, and eight outparcels along Kendall Drive.

Montecito Medical has completed the acquisition of a 37,000-square-foot medical office building in Lithia, Florida.

The building, which opened in 2021, is fully occupied under long-term lease by Orthopaedic Medical Group (OMG) of Tampa Bay.

“This is an outstanding asset in a very attractive submarket, and we are especially excited by the opportunity to work directly with the physicians of OMG and help them make the most of their real estate,” said Jake Clark, Acquisitions Associate at Montecito Medical.

OMG, one of the fastest growing orthopedic groups in the Tampa-St. Petersburg area, maintains 8 locations. At the Lithia property, which serves as the group’s flagship location, OMG provides clinical services, orthopedic surgeries, and physical therapy.

“Orthopaedic Medical Group is dedicated to providing quality facilities for its providers, patients and staff,” said Bill Romaniello, Director of Business Development for OMG. “We are excited about adding the FishHawk/Lithia facility as our flagship location and starting our partnership with Montecito to ensure the facility continues to serve the community for many years to come.”

FishHawk/Lithia is a growing suburban area 25 minutes southeast of downtown Tampa. The OMG property is situated FishHawk Blvd. in the middle of a new mixed-use development that includes single-family and multi-family residential, a retail plaza and middle school.

We are making a substantial real estate investment here, and we anticipate that we will be able to announce additional acquisitions later in the year,” said Chip Conk, CEO of Montecito Medical.